skip to main | skip to sidebar

I hope you all had a great Christmas and a really Happy New Year! 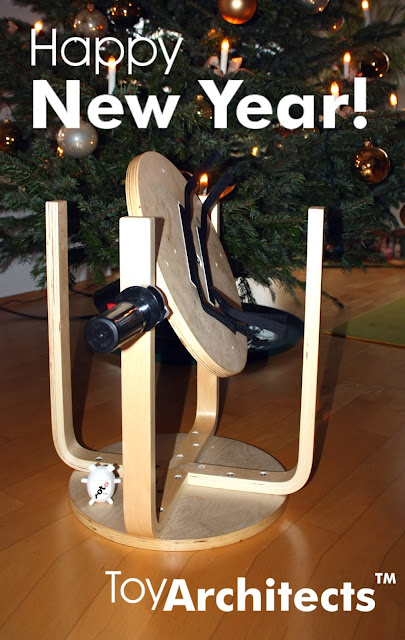 Look what´s been hiding under my Christmastree. Approaching the end of the year I fulfilled a big dream of mine. The construction of a “real easy-to-do” roto-casting machine.

Searching for new ideas apart from rotating frames I tried to build a roto-caster with simplest expenditure. So, one day sneaking a hardware store I found a DIY-stool wich would perfectly fit to my ideas of a simple roto machine.

The second point was the rather complicated rotation mechanism within most roto-casters. So, I ordered two barbecue-motors for separated rotations.

With two stools put together with a little bit of fantasy, screws and some hook-and-loop-tape I finally finished my first roto-caster. And imagine, it really works. Being so happy for the results I  immediately made some new molds for a new Roto-Cavy prototype. 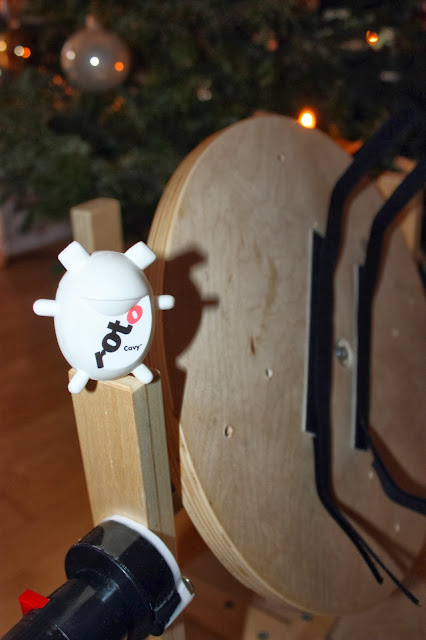 I hope I could show you some new alternatives for maybe your own future roto-caster!

Now, have a great New Year, all of you!

Mathias
Posted by urbanhamster at 12:55 PM No comments:

Toy Architects is proud to represent a new Hamster custom made by Phil Porte aka RazhoR. 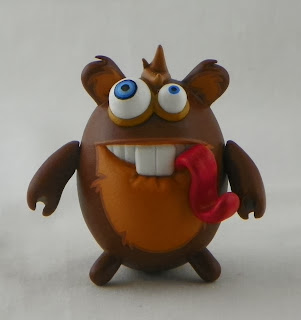 Phil grew up in the Midwest reading Marvel comics and watching the iconic hack and slash films of the 80′s.  He possessed a myriad of art related jobs such as desktop publisher, combat photographer, t-shirt designer and printer and mural artist. 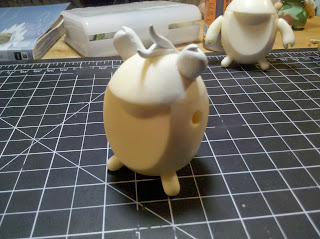 The artwork of RazhoR has shifted more toward sculpting and customizing designer toys, but he still loves drawing his favorite Marvel characters. Phil works in clay, silicone and resin to sculpt, mold and cast original sculpts, costume pieces or bits for customs. 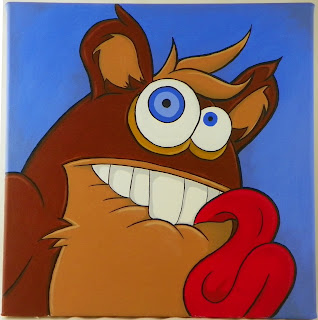 As you can see Otis made of a DIY Cavy the Hamster comes out fantastically. In addition to this fine artwork Phil cought a picture of Otis on canvas, as well!
Thank you so much, Phil!

Please have a look more of Phil´s sites to get an idea of this great artist  http://razhor.com

Posted by urbanhamster at 12:46 PM No comments: 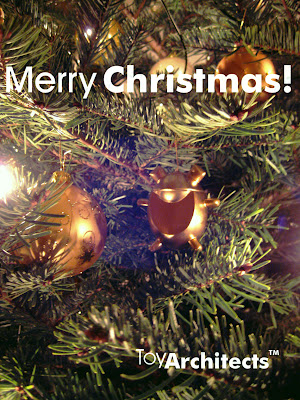 Toyarchitects and Cavy the Hamster thank you for your fantastic support in 2012! We travelled to great places this year. Toyarchitects and my little son are  proud of being invited to the Earth-Movement-Show in San Francisco, curated by Jeremy Brautman and Cooper Berella (aka SuperCooper) at Kokoro Studio. Cavy met some awesome people this year. Thank you for meeting Amy, Brian and Daniel at documenta 13. Thanks so much to Ryan Crippen aka Reactor88 for his great Totem Hamster!

Merry Christmas, may God be with you and a Happy New Year to all of you! Thank you so much Mathias
Posted by urbanhamster at 9:10 AM No comments:

Toy Architects is proud to represent a new Hamster custom made by Ryan Crippen aka Reactor88. 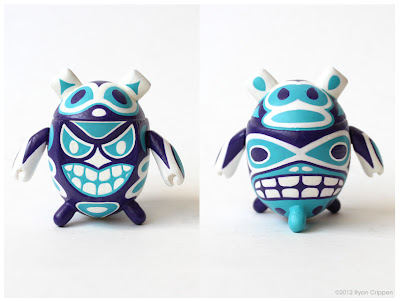 Ryan Crippen was born in Southern California. After painting and drawing continued throughout his youth, Ryan eventually went to get a BA in Illustration and Design. Once out of school, he immediately landed a web development job at a local software company, where he still holds a full time position.
Late in 2005, Ryan decided to get back to his "roots"- so he dusted off his pencils, paintbrushes and markers and returned to traditional illustration and painting. Right around that time he was inadvertently immersed into the urban vinyl toy scene as well- it started with collecting small limited edition platform toys, which soon led to him custom painting the toys himself. He's participated in custom toy gallery shows and his custom designs are sought after by the vinyl toy community. Since then Reactor88 has been developing a unique style in customizing the scene of platforms and designer toys using totems as archetype. 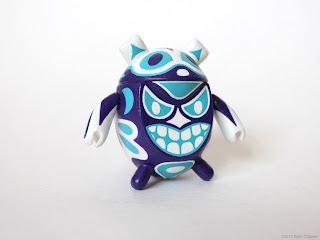 The word totem origins from the Ojibway word dodaem which means "brother/sister kin". It is the archetypal symbol, animal or plant of hereditary clan affiliations. Totem Poles as been used mainly cultures of the indigenous peoples of the Pacific Northwest Coast of North America by carving from large trees. Like an original totem or totem pole Reactor88´s customs have several faces like good and evil mostly positioned one upon the other. Even painting the back of a figure Ryan picks up the way totem poles can be turned around. The significance of Totem Poles is the fact that though round shaped only “front” and “back” are being used to carve faces or complete bodies.
Here´s some further work like the Totem - Moola character originally made by Eric Nocella Diaz http://argonautsresin.blogspot.de 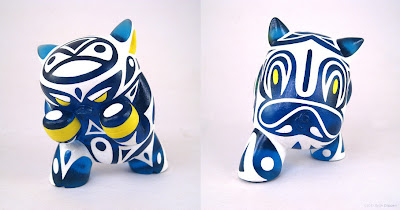 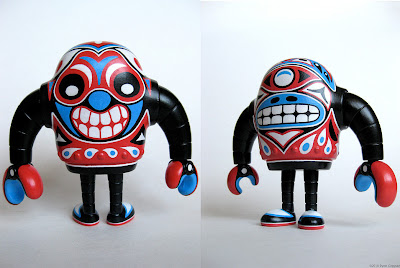 You can follow Reactor 88 on Twitter via http://twitter.com/reactor88/
Buy a Hamster? http://urbanhamster.bigcartel.com/
We´re very glad to finally represent an original Hamster – Totem made by Ryan Crippen aka Reactor 88. Just from the middle of the last year I was curious to see the first pictures.Thank you very much, Ryan!
Posted by urbanhamster at 3:02 PM No comments: 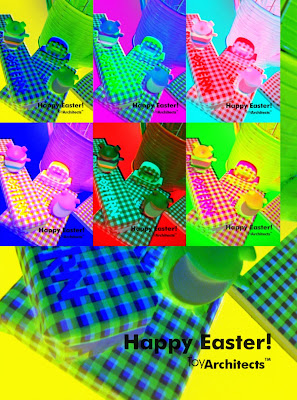 Thank you to all our supporters, customers, fans and friends.

Yours Mathias
Posted by urbanhamster at 5:03 PM No comments: 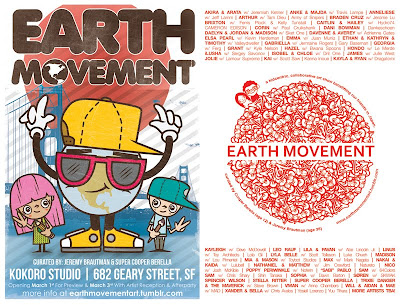 Toyarchitects and my little Son Linus (3 years) are proud to be part of a great Charity - Show, started on March 1st in San Francisco.

This March is the one-year anniversary of the tragic earthquake and tsunami in Japan. While Kokoro Studio’s founder, Keiko, steps out on maternity leave, Jeremy Brautman (age 35) and Super Cooper Berella (age 12) are going in and covering the walls with art by kids and the grownups who love them.
The theme of EARTH MOVEMENT is nature’s powerful forces: sometimes awesome and sometimes devastating. There are many ways the earth moves: it spins, it shines, it shakes, it quakes… How does the earth move YOU?
The show features artwork by emerging solo artists, kids in collaboration with established artists (who happen to also be their parents, uncles, aunts and neighbors) and a few special friends. Please see the artist list here. 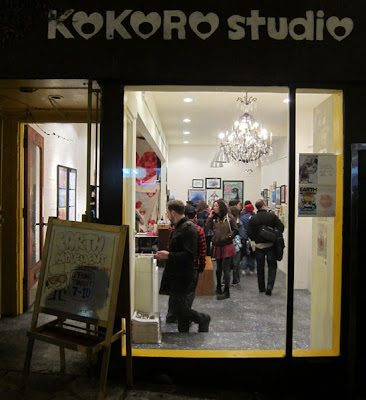 EARTH MOVEMENT opened for preview at Kokoro Studio in San Francisco on Thursday, March 1st at 7PM. There will be an official art opening reception featuring artists, curators and refreshments on Saturday, March 3rd.

A WORD FROM THE CURATORS:
One year ago last March, a magnitude 9.0 earthquake struck Japan. It claimed the lives of more than 15,000 people, triggered nuclear accidents and moved earth on its axis. Just 3 months before it was even a seismic blip, 7 artists journeyed from Japan to San Francisco to be part of an art event called LOVE MOVEMENT. Shin Tanaka and Nao Shimojo conceived of the show, I curated it, and Cooper attended it. When the Japanese artists had to go home, we’d all become good friends. Nobody knew they were returning to one of the biggest natural disasters in history.
We´re taking part with three pieces of artwork. Each one a drawing on canvas and one grassy figure - special of Cavy the Hamster and one which comes out the first time. He´s called Süpacemen Linus and was once an experiment beeing developed together with Cavy the Hamster. 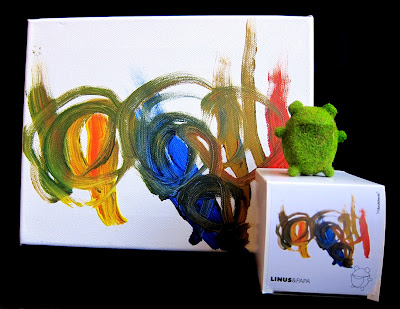 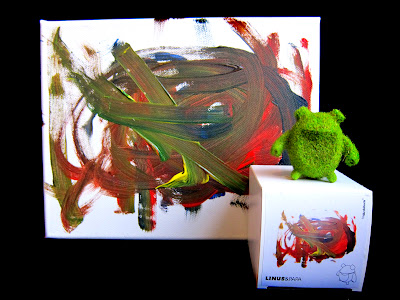 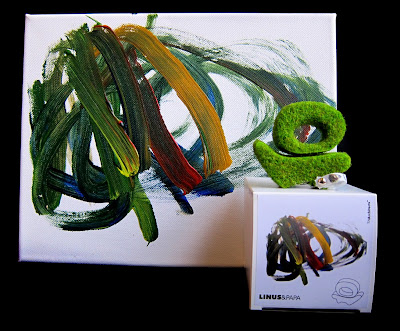 Linus drew three pictures when we where doing the work for the show. When I had the idea to combine them with some figures I first thought of Cavy. To make it more individual It should be one with fixed and one with articulated arms and... then I thought of activating the spaceman as the third figure. The pictures with figures are called "My litte World I - III", by Linus and Papa. Each figure comes in a special Box with a picture of the painting an has a little Tag with one of the pictures it belongs to. 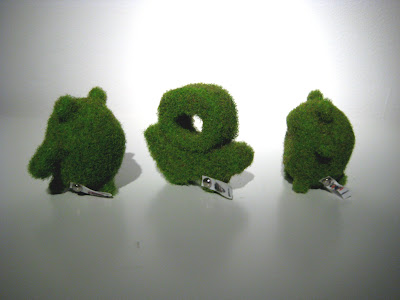 Much Love and thanks for the invitation to the Curators Jeremy Brautman and Super Cooper Berella and thanks so much to Kokoro Studio and Keiko. 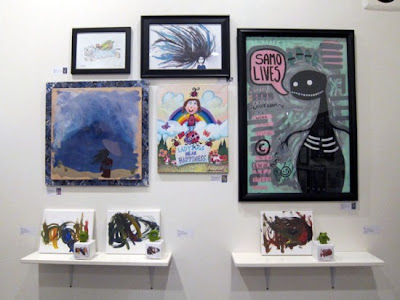 to see the whole artwork and support the benefit of the movement.
Happy birthday Jeremy :)
Posted by urbanhamster at 11:31 AM No comments: 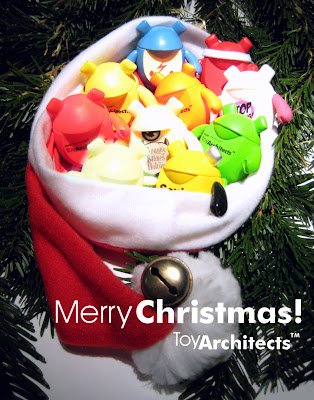 Toyarchitects and Cavy the Hamster thank you for your fantastic support in 2011!
Posted by urbanhamster at 3:17 PM No comments: